Ancestor Files: The Mystery of Aaron Horn at Fort Boonesborough

Our ancestors often leave multiple mysteries when they pass. As family researchers, part of the fun is unraveling these mysteries. Al Horn has been working on the mystery surrounding one of his great-grandfathers who was an early settler at Fort Boonesborough. In this post, Horn presents the evidence he collected along with the questions he has. Maybe you know the answer.

Aaron Horn Sr. and family moved west to Fort Boonesborough in the spring of 1778. I am using a transcript from a Madison Circuit Court at the courthouse in Richmond, Kentucky, in June 1803 as a primary source for this article.[1] 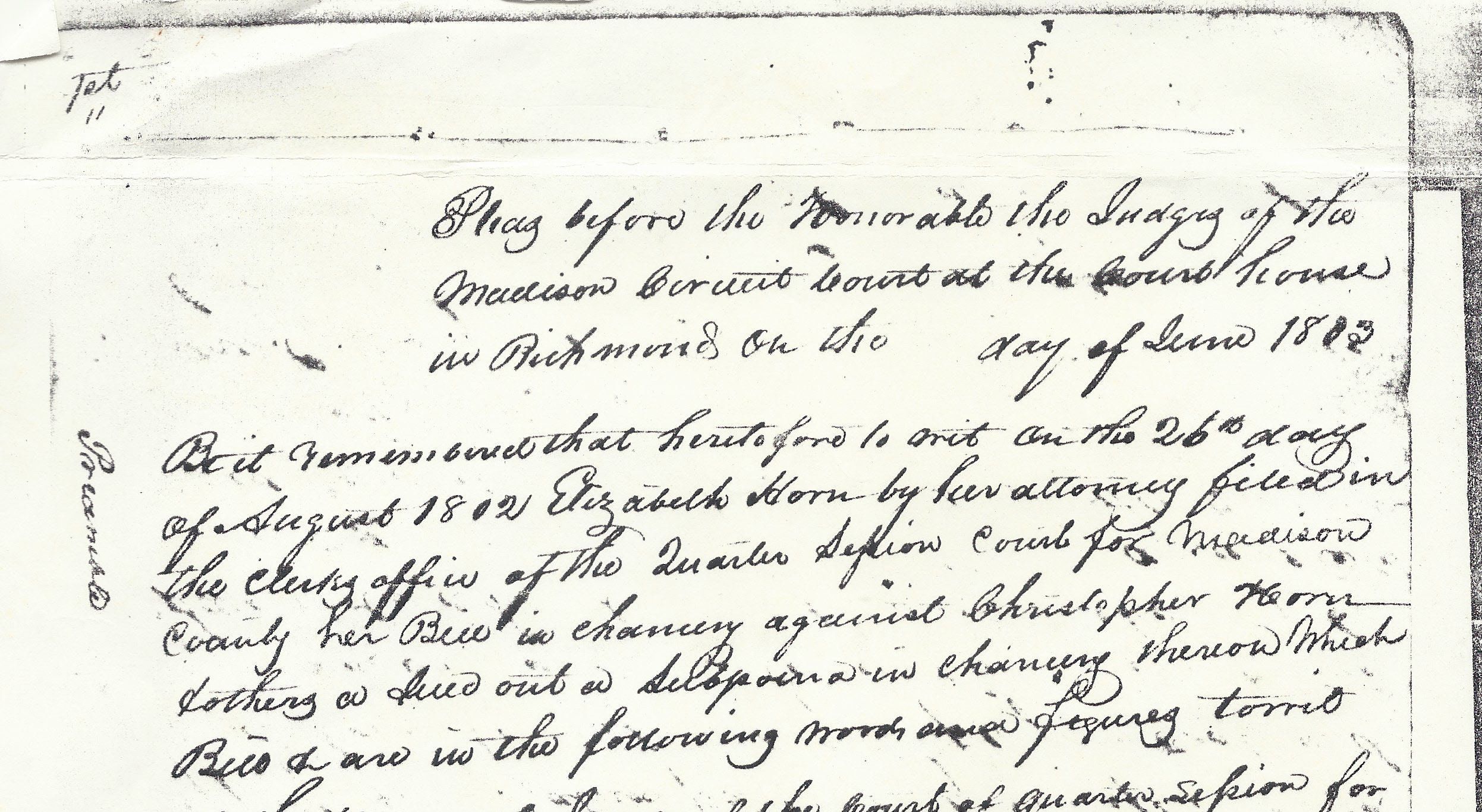 In this source, the trial is between Aaron’s widow Elizabeth and her eldest son, Christopher Horn, in a land dispute. A court testimony states that Christopher Horn moved to the area years later and would not have been at the fort for the battle in the fall of 1778. Three more sons either testify or are a part of this court record, Mathias, Aron, and William. I believe Aron is misspelled and is Aaron Horn Jr.; Aaron Horn Sr. is also spelled Aron in the court document. Spelling issues were not unusual in early American history. 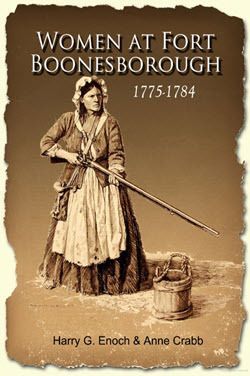 The Horn women are covered in the Women At Fort Boonesborough,1775-1784 book, and including the parents and children, indicated a family of eight: the parents, four sons and two daughters.[2] Some sources indicate two more, Jerimiah and another daughter, Elizabeth. I reference the official court record here, however a count of family members is not my purpose, safe to say a big Horn family moved to the fort.

The widow Elizabeth testified in Madison Court in 1803 that “her husband departed this life very shortly after arriving”.[3] People testified that the Horns arrived in the spring of 1778 and Aron Sr. died the following fall, either the last of September or first of October. Testimonials included sons William and Mathew Horn.[4] It is worth noting that Aaron Jr. didn’t testify in 1803, perhaps he didn’t want to participate. Elizabeth Horn is mentioned as a widow at the fort in the Enoch & Crabb book.[5]

On page 28, in the same short paragraph mentioning Daniel Boone, I have seen references to Aaron Horn Sr.’s accidental death. Presumably, he was chopping cane to help refortify the fort after the Great Siege for several days. According to Enoch & Crabb, “The victory proved to be a critical turning point of the Revolutionary War in the West. Had Boonesborough fallen, it is likely all the Kentucky settlements would have been abandoned”.[6] 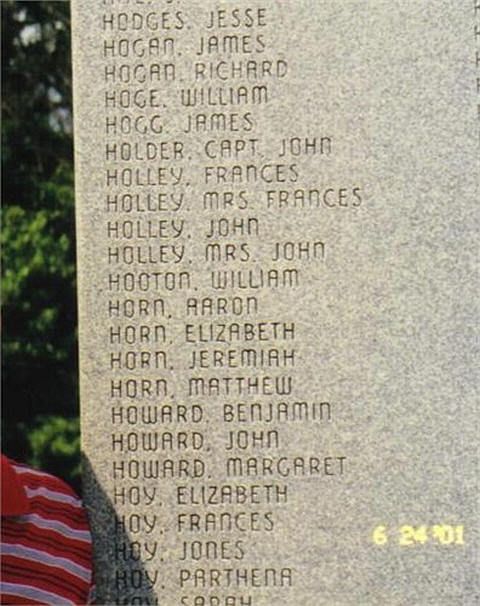 There is a monument at the Fort Boonesborough historical site with the following inscription:

“Dedicated by Their Descendants to the Sacred Memory of the Brave Pioneers who Entered the Wilderness of what Later became Kentucky and Formed the Settlement known as Boonesborough, First Fortified Settlement in Kentucky. We Honor These, Among the First Families of Kentucky.”

For the First Mystery: Which Aaron Horn is Listed?

If somehow Aaron Horn Sr. was overlooked or intentionally left off, why? If it is indeed Aaron Horn Jr., why would he be listed above his mother and not lower on the monument with two other brothers?

The Second Mystery: How did Aaron Horn, Sr., Die?

There is no doubt about his death based upon the 1803 court record.[7] There are testimonies from family and friends that were aware Aaron Horn had died in the fall of 1778. No testimonies mentioned how he died. Family legend has it that Aaron Horn Sr. cut his hand while chopping cane, got infected and proved fatal.[8]

Accidents happen, but that is certainly a strange cause of death. Especially for an experienced farmer that helped to clear a trail to Boonesborough. It was a rough wilderness area, still they should have been able to stop the bleeding and cover up the wound. Cleanliness could have been an issue given the environment. There were other deaths during the battle, no doubt including bleeding.

There is no military record for Aaron Horn Sr. as there is for at least three sons. There is also no proof he was wounded in defense of the Fort. I would assume he and other non-enlisted men and women were helping to defend the fort, or face death from the attackers. There is no burial site information or record of death that family historians have been able to find. I have had communications with people that were unable to locate a grave at or near the original fort site.

To summarize, a strange death with no record and no burial site. This seems very odd, even when considering the wilderness area before Kentucky became a state. I am not suggesting foul play, but is it possible that Aaron Horn Sr. was captured and/or killed by the Native Americans allied with the British?

Even Daniel Boone was captured by Native Americans according to Enoch & Crabb.[9] He eventually escaped and returned to Boonesborough. Perhaps Aaron Horn Sr. was not so fortunate, and the family chose not to acknowledge his capture?

Purely speculation on my part and the mystery remains.

Update: Family members contacted Al and were able to provide more details about this man. Thanks to all who did that.

Vicki Whitaker, Registrar from Society of Boonesborough, suggested this additional text for researchers: "Anne Crabb's book, "And The Battle Began Like Claps of Thunder," is a very accurate account of those living at Boonesborough during the Siege of 1778."

Allen Horn is a direct descendant of Aaron Horn Sr. and his wife Elizabeth, who moved into Fort Boonesborough in the spring of 1778.  He is a member of the National Society of the Sons of the American Revolution through Aaron and Elizabeth’s son Matthew Horn, who eventually served under George Rogers Clark's command.

Allen is now retired and living with his wife Joyce in Hewitt, Texas, after relocating from Iowa in 1988.  Most of these recent Horn relatives lived in central and southern Iowa. Allen worked in accounting for several companies over the years and this is his first publication effort.

[1] Transcript from a Madison Circuit Court at the courthouse in Richmond, Kentucky, in June 1803.

[3] Transcript from a Madison Circuit Court at the courthouse in Richmond, Kentucky, in June 1803.

[7] Transcript from a Madison Circuit Court at the courthouse in Richmond, Kentucky, in June 1803. 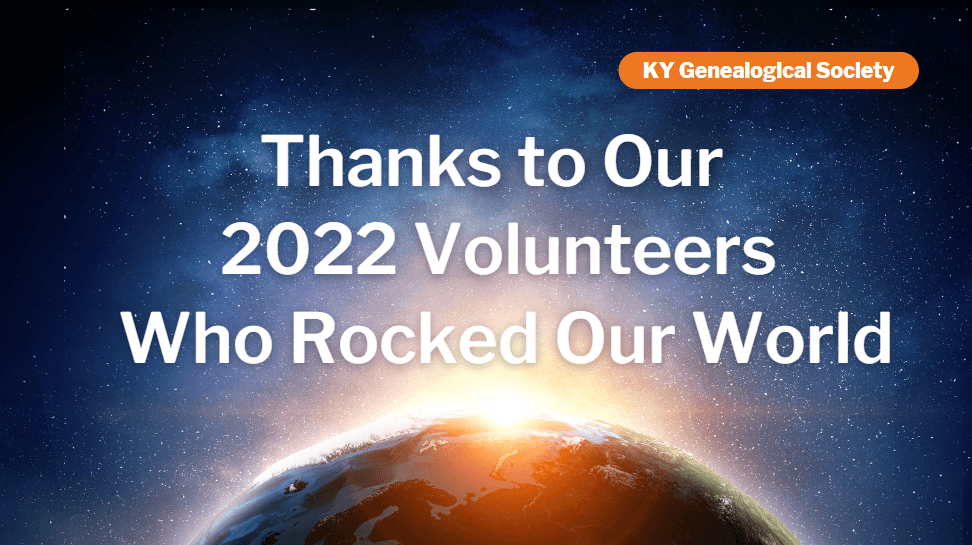 Thank You To Our 2022 Volunteer Staff

We want to thank the following members for their help in 2022.