Before 1818, the Native American tribe of the Chickasaw owned much of the land on the east bank of the Mississippi River, including 13,000 square miles they considered hunting grounds between the Tennessee and Mississippi Rivers. In that year, the United States bought that tract of virgin wilderness, and annexed it to Kentucky and Tennessee. This bargain with the Chickasaw established the maps of Kentucky and Tennessee as they appear on current maps.

While part of the Chickasaw territory, the hunting ground was called ”the land between the rivers”. Afterwards, it became the “Jackson Purchase”, named for General Andrew Jackson, chief negotiator of the purchase. Today, the part of this land in Tennessee is called West Tennessee. Only the smaller portion in western Kentucky is still known as the Jackson Purchase, or “Purchase” for short. The Jackson Purchase is the smallest region in Kentucky, consisting of only eight counties: Ballard, Calloway, Carlisle, Fulton, Graves, Hickman, Marshall, and McCracken.

The Tennessee and Cumberland Rivers lie between the Purchase and the older parts of Kentucky. These two important rivers lie only about eight miles apart and entirely cut off the Purchase from the rest of Kentucky. The only way to cross the Tennessee River before 1932 was by ferry, and both Purchase areas of Kentucky and Tennessee were isolated from the older parts of their respective states. Later, politics would also isolate them. The Purchase became Congressional District 1, and was politically more aligned with the secessionist attitude of Tennessee than the neutrality of Kentucky in the years leading up to the Civil War.

While this article focuses on Kentucky’s Jackson Purchase, the only thing that separates West Tennessee from the Purchase is the invisible state line. The early settlers in both states came from the same areas: Kentucky, Tennessee, Virginia and the Carolinas. Their shared heritage, isolation from the rest of Kentucky and Tennessee, and the untamed land they had in common, made the entire region far more cohesive than with older, more settled parts of their respective states. In particular, residents in the Purchase considered themselves to be in a land apart.

The Land Between the Rivers

The Chickasaw were not the first indigenous people who lived in the Jackson Purchase. For at least a thousand years, Native Americans of the Mississippian culture inhabited the land between the rivers. These people left villages, earthworks, and burial sites throughout the Mississippi River basin. In the Jackson Purchase, sites have been found along rivers in the Kentucky counties of Hickman, Fulton, Carlisle, McCracken, Ballard, and Calloway. The fate of these industrious people is not well understood. They disappeared before European exploration arrived in the 1540’s. It was the Chickasaw who met the Spanish, French and British exploration parties along the Mississippi River.

After the Revolution, the empty Chickasaw hunting grounds looked more and more tempting to the land-hungry Americans. Undeveloped land east of the Mississippi River was dwindling, and the desire for homesteads was ever increasing. The Federal Government met the demands for this prime wilderness by appointing General Andrew Jackson, soon to become President, and the first governor of Kentucky, Isaac Shelby, to negotiate with the Chickasaw for their hunting grounds.

The transformation of the Jackson Purchase from Native American hunting ground to farmland began on October 18, 1818, with the signing of the Treaty of Tuscaloosa. The American negotiators, Jackson and Shelby, were well known for their hard line against Native Americans. 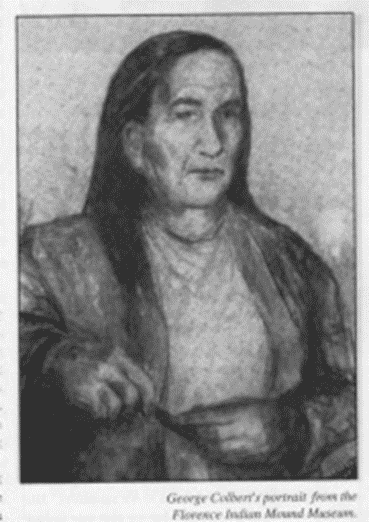 The Chickasaw negotiators were George and Levi Colbert. These half native brothers were Chickasaw chiefs.  They were chosen because of their understanding of both native and European culture and languages. Historians believe that the Colbert brothers accepted bribes to ensure that the purchase would go through. The main article of the treaty agreed to pay the Chickasaw Nation $300,000, in fifteen yearly payments of $20,000 each.

Over the next 21 years, all remaining Chickasaw lands east of the Mississippi River would be sold to the United States, and the Chickasaw tribes would follow the Trail of Tears to Indian Territory in Oklahoma. The land between the rivers was no more.

Early Settlement in the Jackson Purchase

The Jackson Purchase was wide open. Less than 250 veterans held farms, mostly along the Mississippi River. The remainder of the Purchase could be bought for $40 a quarter-section, and new arrivals poured in as soon as land became available.

It took about three years from the signing of the treaty to selling land. In 1822, a temporary Land Office was opened in Princeton, Kentucky, about 20 miles east of the Tennessee River.  The first patents were granted in September of that year. In 1825, the land office was moved to Wadesboro, the county seat of Calloway County. Wadesboro would remain the location of the land office as long as one was needed in the Purchase. In those early years, Wadesboro was the unofficial “capital” of the Jackson Purchase. In 1842, when Calloway was split, Wadesboro was no longer a good site for either county’s seat of government.  Wadesboro’s population never exceeded 300. After the division, it faded away, and is no longer an incorporated town.

County Creation and the Rise of Towns

In 1818, the entire Jackson Purchase was known on maps as Indian Lands. By 1820, the Purchase had been divided approximately in half, and allocated to two counties already existing just east of the Tennessee River: Caldwell and Livingston Counties.

Slavery in the Jackson Purchase

Kentucky’s status as a slave state enabled settlers to bring enslaved people with them to their new homes. Realistic estimates of southern households that held slaves was about 30%. In the Purchase, the percentage was somewhat less. In the eight counties of the Purchase, perhaps only four or five households held more than 100 people.  The vast majority of slaveholders held fewer than 10 people.

This smaller than average number of the enslaved does not imply that being enslaved was less devastating than in other areas. Anecdotal evidence suggests just the opposite. In fact, small scale slaveholders’ enslaved people were likely to suffer more deprivation because the entire household was economically more unstable.

Fulton County, with its production of cotton had the highest percentage of the enslaved, and Marshall County’s black population was the smallest.

The Jackson Purchase in War

The Jackson Purchase was the site of conflict in both the Revolutionary War  and the Civil War. During the Revolution, George Rogers Clark established Fort Jefferson near Wickliffe, Kentucky, to repel British and Indian invaders from the Northwest Territory, just across the Ohio River. Instead, the Chickasaw, who objected to American forces in their territory, besieged the fort. The fort was abandoned less than a year after it was constructed.

The Civil War: Kentucky’s Pivotal Role in the Western Theater

Kentucky’s western river system was the key to control of the southern states east of the Mississippi, and west of the Eastern Seaboard. The Mississippi, Ohio, Tennessee, and Cumberland Rivers led deep into southern territory, and both the Union and Confederacy recognized their strategic significance.

As a borderline state, Kentucky did its best to maintain neutrality at the beginning of the war. The Union had troops in Missouri, just across the Mississippi, and the Confederates built forts on the Tennessee and Cumberland Rivers just over the Tennessee line to protect northern incursion into Tennessee, Mississippi, and Alabama.

Kentucky’s neutrality was broken in the fall of 1861, when the Confederates moved into Kentucky and set up a fort at Columbus, Kentucky. This fort was armed with over 200 cannons, and a huge chain was stretched across the Mississippi to block Union ships from the lower Mississippi.

Within days of the Confederate penetration into Kentucky, newly minted brigadier general Ulysses S. Grant occupied Paducah, Kentucky, in response. Grant used the old Fort Jefferson as a staging area for harassing the Confederates, and in November, he attacked the fort at Columbus. The fort did not fall, and the Confederates continued to block Union traffic on the Mississippi. 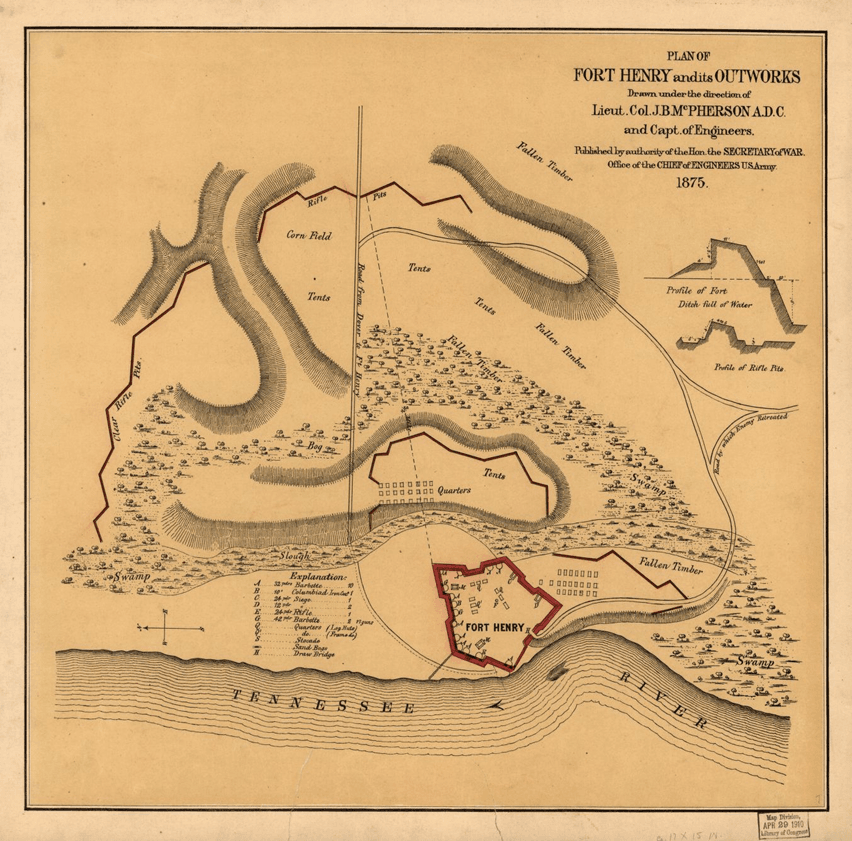 The following February, Grant redeemed himself by capturing Forts Henry and Donelson in just 8 days. Although located in Tennessee, they were key to control of the Tennessee and Cumberland rivers. With the Union occupation of much of the Purchase, and these two battles, the only river the Confederacy still held was the Mississippi. Almost immediately, with no Confederate backup in Kentucky, the Columbus and Belmont facility was abandoned, and the Union immediately took control.

Although the Union troops never quite lost all control of the Jackson Purchase, it was a near thing. The Purchase was overwhelmingly pro-Confederacy, and opposition to the Union occupation was stiff. Guerilla fighters, bushwhackers, and common criminals burned out, raided and murdered Union troops and sympathizers, and Union sympathizer militia were equally as brutal.

The last major conflict in the Purchase was the Battle of Paducah. Cavalry General Nathan Bedford Forrest attacked Paducah in March of 1864 during a raid for supplies in West Tennessee and the Purchase. Had it not been for Black Union troops that defended Paducah’s Fort Anderson, Forrest’s troops would have captured the entire town. They did succeed in capturing many horses and supplies, and left much of the town in flames.

Already feeling more in common with its southern neighbors than the rest of Kentucky, the bitter feelings from Union occupation would further erode the Purchase’s relationship with the rest of the state. This enmity would continue for years after the war. Racism would be rampant in the days after the war, and would continue well into the mid 1900s.

Fascinated with family history since the age of 10, Deborah Outland  began family research seriously in the mid 1970s. Her career in software development slowed down her research, but since her retirement, genealogy is her primary pursuit. Since 2015, when she  tested her entire family’s DNA, she has branched out into genetic genealogy, integrating it with her traditional research techniques.. her primary tree is online at Ancestry, and she is currently transferring that Tree to the collaborative WikiTree web site where she is a a volunteer genealogist. 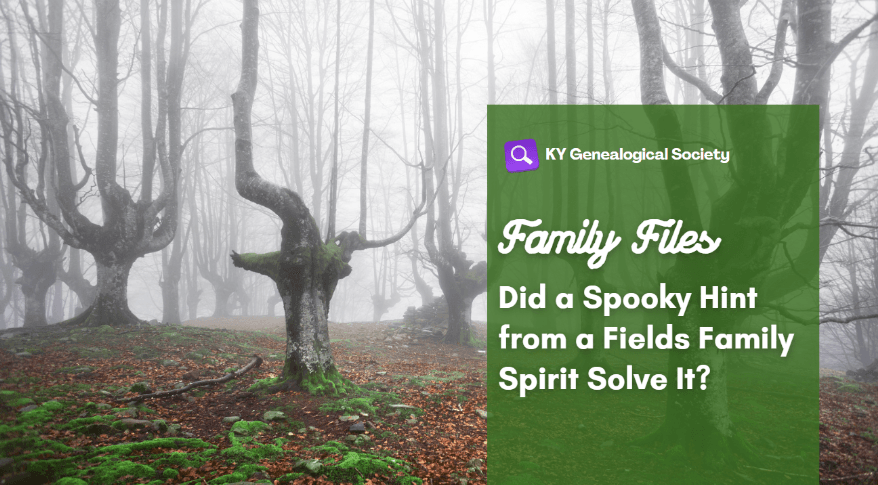 A Spooky Hint from an Ancestor Provides the Essential Clues

When searching for your ancestors, preparation is the key to success.