Three Tips for Researching KY When You Don’t Live There

When you live in Kentucky, it’s easier to visit counties where your ancestors lived. Traveling to the Kentucky State Archives is a day trip at most and some could even walk there.

While my roots are in Kentucky, my body is over 500 miles away in the Sunshine State. Here are a few genealogy tricks I have discovered for researching my family from afar.

Tip One: Search for Records at Your Local Keyboard

The most obvious place is online since it’s as close as my keyboard. Many of you already use subscription genealogy sites, such as Ancestry and MyHeritage. There are other sites with free resources.

Family Search has many county records cataloged at their site but not indexed. Recently I wanted to learn about the Watkins family in Breathitt County. It delighted me to find this site cataloged many of the court records from the 1850s - 1930s.

To find county specific information, you can select Catalog from the Search menu. In the field, type the county of interest.

It varies what information they have available from county to county. Many of the original documents are on microfiche. Now, Family Search makes the records available as a PDF that you view on-line. While lacking a digital index, some books have an index so you can find your ancestor.

If there isn’t an index, you get to scroll through the records enjoying the inventive penmanship from the 1800s.

Using the Breathitt County deed books, I learned that Lewis Watkins had purchased property in 1896. However, the deed index also revealed by 1900 his sons were landowners. One of his sons, Clay Watkins, was the grantee in over fifty deeds.

Here are the offerings for Breathitt County to give you an idea. 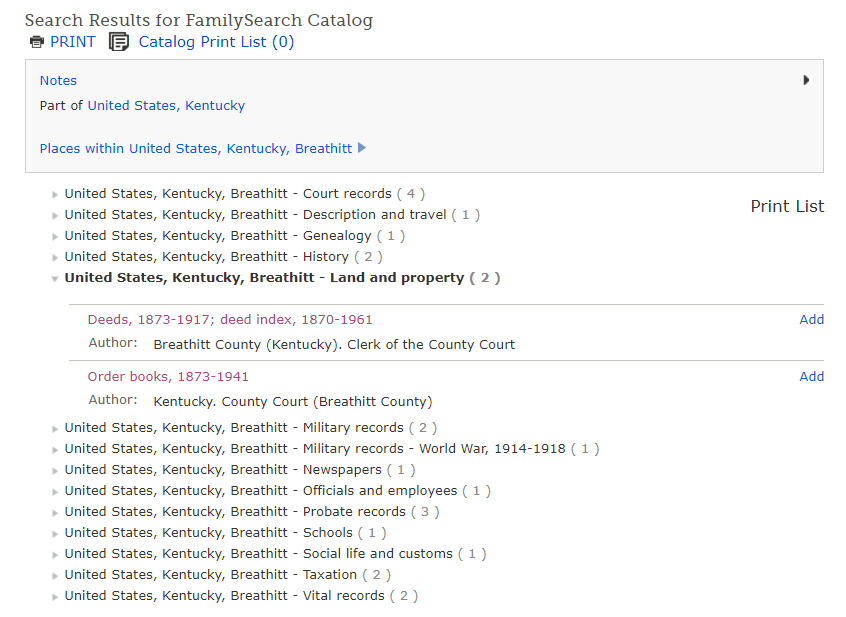 Other Resources for Kentucky Family Genealogies

An often overlooked resource is Google Books. Google has an enormous collection of books. Some you can view online, some you can view snippets of, and others you just learn of their existence.

Lewis Watkins married Mary Salyer. She was the daughter of the Honorable Samuel Salyer, who was a member of the Kentucky Legislature. He proposed the legislation that created Magoffin County. The citizens named Salyersville for him.

When I searched Google Books for him, I learned Elizabeth Salyers wrote a fairly detailed family history called The Salyer Family. For this book, Google allows a search but only returns page snippets. However, the search was enough to confirm that it was my family.

Due to copyright restrictions on the book, there were not any digital copies available. Google pointed me to WorldCat (worldcat.org), which pointed me to the Jacksonville, Florida library. This library is within an hour of my home. There are several other copies available across the United States. 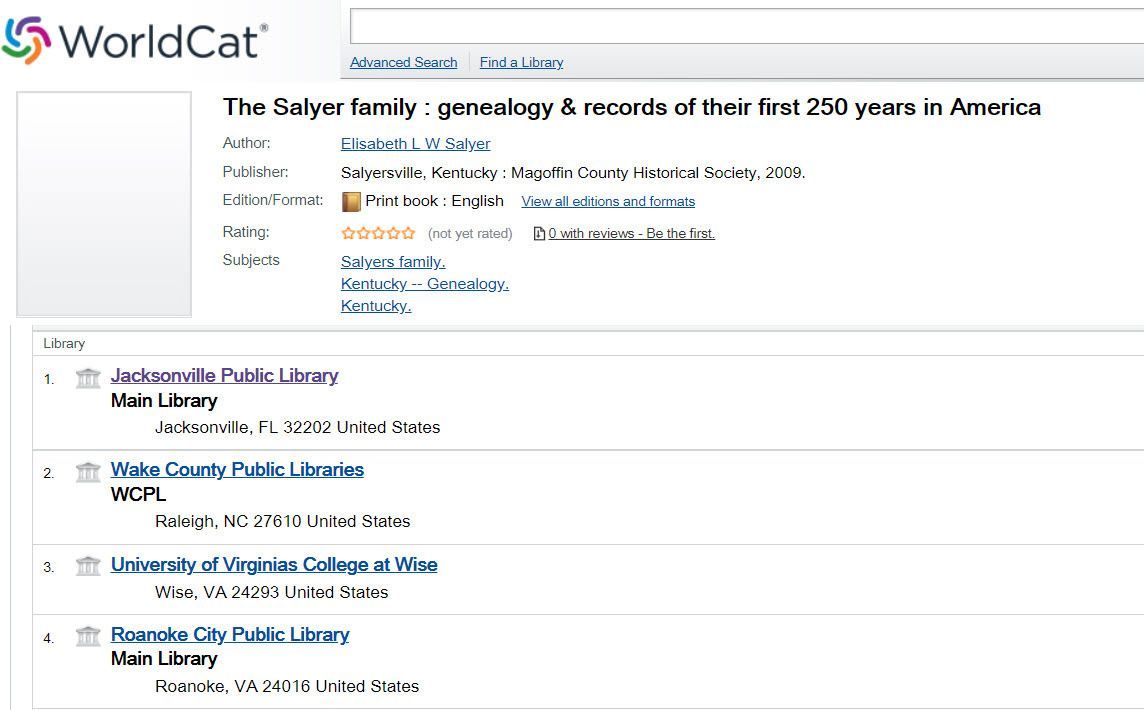 While visiting the library in downtown Jacksonville, I learned half of the fourth floor contained genealogical studies materials. When the librarian found my prized text, I noticed there were several other shelves of family genealogy books. Along with a complete section on Kentucky history and many other records.

The Salyer Family book really was a prize. The author had compiled over 700-pages of family history. Using my iPhone, I took pictures of the pages. However, the librarian said the library had scanners available for public use.

The library has aided me several times in researching Kentucky. After visiting the Jacksonville library, I became more curious about the other surrounding libraries.

At the St. Augustine library, they didn’t have an extensive Kentucky selection but there was a vast collection of Civil War books. Through Fold3 (fold3.com), I knew Lewis Watkins had enlisted in the Union army in September 1864. Since the war ended in 1865, it wasn’t clear if he ever actually served. I didn’t understand how to find this information on the website.

In the volumes there, I discovered a book that contained Kentucky soldiers. What I didn’t find was Lewis Wadkins or Watkins in that list, which confirms he didn’t serve. However, there were other Watkins family members listed, so I have some fresh paths to explore.

Then a special find was at the Flagler County library. All past issues of the Kentucky Explorer bound and awaiting my greedy eyes. Along with many books about how to do genealogy research, there was the ever useful Evidence Explained volume. It’s an expensive volume for me to purchase as a hobbyist, but the library makes it easy.

Tip 2: Walk or Flying Around the Kentucky Counties

I have never visited many of the areas where my ancestors lived their whole lives. Using the map websites, such as Google or Bing Maps, you can view the area in multiple ways. With the 3D view, I flew over Breathitt County. Once I realized how mountainous it was, I had a different viewpoint from my ancestors. It hadn’t occurred to me how difficult it might be to farm or raise livestock there for a young Lewis and Polly Watkins. Clearing the forest so they could have a homestead was probably their first job.

I read how much the waterways were used to move supplies and people around. From flying around, I can see more of the creeks. Now I understand how useful that would have been as well as understanding where the paths would have been.

With Google Maps, I can drive around the county or other areas. This is a rural area so I wonder if it has changed much from when Lewis lived here. The forest appears dense. The roads are black topped but they run through the valleys. I’m sure these are the same roads he used to get to town.

My other relative, John P Salyer, served as a clerk to the US Senate around 1880. The city directory showed his address, and the house is still standing. Easy to find with Google Maps. 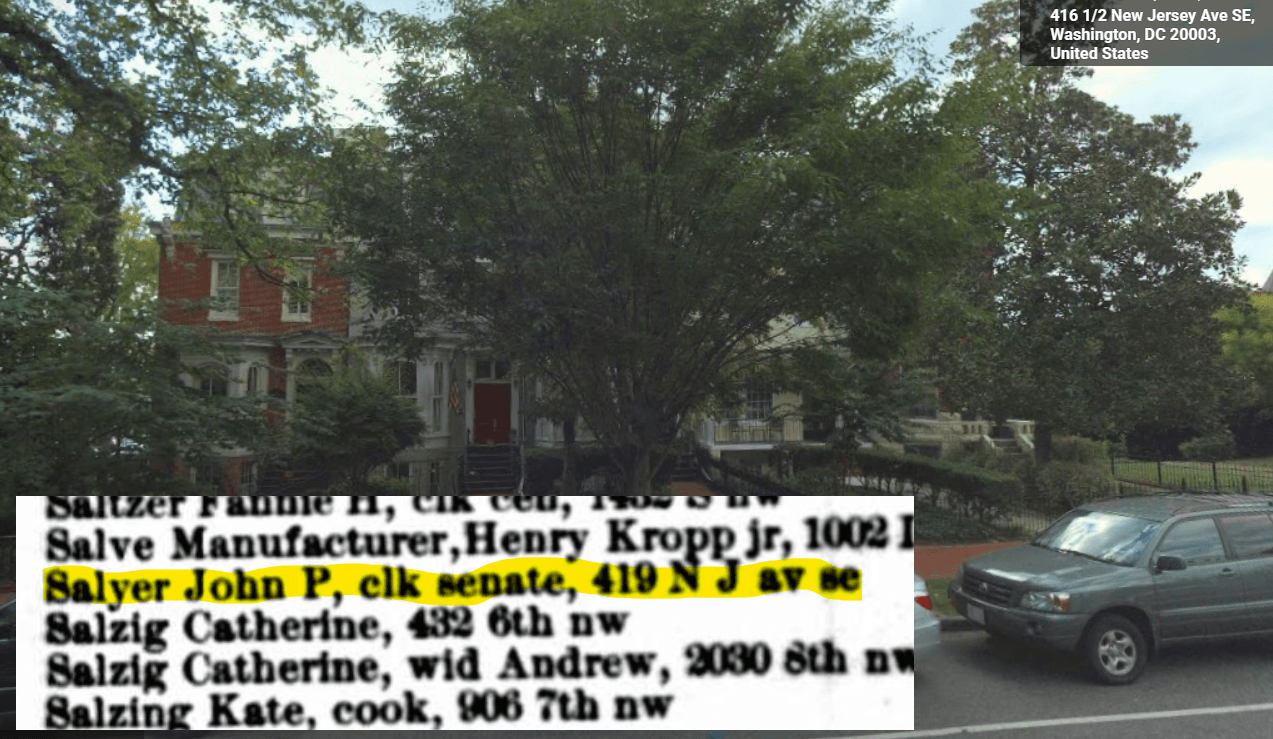 Tip Three: Use Your FAN Club

Genealogists are often seeking an ancestor’s Family, Associates, and Neighbors (FAN) club. Just remember you have a FAN club you can empower.

Family as a Resource

Through WorldCat, I discovered the Eastern Kentucky University’s Crabbe Library had some specific books that I needed. With the details on her phone, my cousin visited the library and found the desired books. Next thing I knew, she was texting me photos.

Don’t forget to call family members that might have personal knowledge of the area. While I grew up in rural Kentucky, I don’t think our garden was quite the scale of Lewis Watkins in 1880. As a farmer, he was probably more dependent on the land for survival.

In the 1880 US census, there was an Agricultural Survey of his farm. I called my grandmother and read the record to her. She explained why he was probably growing various crops and how he most likely farmed the land. From that conversation, I found some essays that Morehead University students had written about life in Jackson, Kentucky around that time. These conversations helped me understand how difficult it was for them to survive.

Think of Associates in a Bigger Way

Through your association with the Kentucky Genealogical Society, you have access to many digital resources and online education. You can search for your ancestor in the many resources on the website.

As we learned in the Using Kentucky State Archives webinar, our associates at the state archives can handle research requests for a reasonable fee of $15 for out-of-state residents.

Neighbors are on Social Media

Facebook hosts a great resource for Kentucky researchers. There are genealogy groups based by county where other amateur genealogists gather. Along with the same interests as you, those folks have special knowledge of the area. If you search Facebook for the county with genealogy, you’ll be able to find a group for most counties.

Through those groups you can find cousins who may be further in their research. Many have shared family photos. For my research, one cousin explained how a great grandfather died in 1831. While we don’t have a death record, he was young when he died and that is a plausible explanation. Another cousin explained my great grandmother, Polly Watkins, divorced Lewis Watkins, and had a second life. These cousins are great!

Even without living in Kentucky, I have been able to find records to support my genealogical pursuits. There are many resources available that don’t even require me to migrate from my chair.